Oleksandr Usyk’s repeat victory over Anthony Joshua did more than earn the recently vacated Ring Magazine heavyweight title, the split decision – which was as gritty as it was technically brilliant – also allowed the undefeated two-division champion to regain the No. 1 spot in the publication’s pound-for-pound rankings.

However, like his rematch with the ultra-motivated Joshua, reclaiming the P4P Throne came with some resistance. Naoya Inoue, the three-division titleholder and current Ring bantamweight champion, knocked Usyk from the No. 1 with his breathtaking two-round blowout of future hall-of-famer and defending WBC beltholder Nonito Donaire in June.

Some members of the Editorial Board (including Yours Truly) and the Ratings Panel still favored the Japanese star in the top spot, but they were ultimately outvoted.

Panelist Anson Wainwright kicked off the debate (as usual).

“Oleksandr Usyk re-affirmed he is some fighter, inside and outside the ring,” stated Wainwright. “For me, he’s the No. 1 pound-for-pound fighter.”

“I’m not sure I’d bring in Usyk at No. 1 pound for pound just yet,” he said. “Stopping Nonito is still one notch above a close decision over Joshua.”

Panelist Daisuke Sugiura sort of straddled the fence with his opinion (which understandable), but gave the Usyk nod his blessing.

“I’m good with Usyk being No.1,” he said. “I still think that Inoue is the best fighter in the world, and it’s really a close call, but what Usyk did in the 10th and 11th rounds after Joshua’s frantic comeback was amazing. That was something special against a much bigger guy and he deserved to be declared No.1 again.”

Your favorite Editor-In-Chief was equally torn between the two elite standouts, but was a tad more impressed with Inoue’s recent performance.

“I still think Naoya Inoue is the Pound-for-Pound King,” I stated to the Panel. “I love Usyk, I think the world of his skills, versatility and resolve, but Anthony Joshua just ran him close, and as good as ‘AJ’ is at heavyweight, he’s not anywhere close to a pound-for-pound elite in my view. I get that there’s a weight factor here, and Usyk once again overcame it, so I totally understand anyone going with ‘Mr. Feel’ regaining the No. 1 spot.”

“I want to elevate Oleksandr Usyk to No. 1,” he said. “The only reasoning I can find not to is that two of his biggest and obvious challenges (Tyson Fury and Deontay Wilder) have not been met. Yes, not it’s Usyk’s fault and he is working his way to that, but with Inoue I don’t think we can say he has not met the best in the divisions he has been in. Am I off base here?”

Not in my humble opinion, but then Panelist Michael Montero made his pitch for Usyk being No. 1.

“I shade Usyk over Inoue for the top pound-for-pound spot. It’s CLOSE, and I wouldn’t argue against either man at No.1, but here is my reasoning for the Ukrainian:

“The Monster’s TKO2 win over Donaire was very impressive. But the reality is, it came against a fighter who will turn 40 years old in a few months and is on his way out. Inoue has had a good run at bantamweight, but at 115 pounds he wasn’t nearly as impressive. There are several STUDS at 115 right now that I’d love to see Inoue face,” continued Montero. 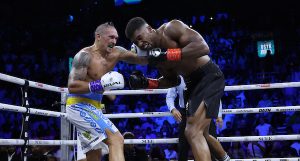 Usyk overcame many disadvantages (including size) to beat Joshua again.

“On the other hand, Usyk just beat a man who is naturally 40 pounds (20%) heavier, and in his physical prime. And, unlike Inoue, Usyk has unified belts in two divisions, almost all in his opponents’ back yards.

“Those nuances give him the edge in my humble opinion.”

“I favor Usyk’s resume over Inoue’s. I’d also like to see Inoue face the likes of (Stephen) Fulton and ‘MJ’ (Murodjon Akhmadaliev) at 122 pounds. (This debate) is a good ‘problem’ to have.”

“I still like Inoue as pound for pound No. 1,” said Gray. “He’s conquered three weights; the method of victory is habitually thumping KO; and he’s on electrifying form. In terms of who he hasn’t faced at bantam: (Johnriel) Casimero can’t stay out of trouble. (Luis) Nery failed a PED test and couldn’t make weight before moving up.”

Senior Editor Brian Harty made a rare panel appearance to give his typically articulate and well-thought out opinion. 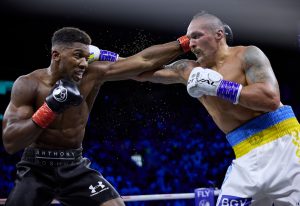 “I have nothing negative at all to say about Monster, his accomplishments or his position as No. 1 – he wins hands-down as the guy I want to watch – but I think Usyk’s win in this rematch was more impressive than beating Donaire. My takeaway is that I’ve been thinking too much about body morphing in pound-for-pound and not enough about brain transplanting; it’s the one thing (in fantasy land) that cuts through all the impossibilities of comparing a bantamweight and a heavyweight who are both at the top of their game, doing all that they can with what’s available. Joshua might not be a pound-for-pounder himself, but he went into that fight as financed, well-coached and physically advantaged as a fighter can be, and was further advantaged by hindsight. Usyk negated all those advantages and broke Joshua mentally once again, all while dancing in a minefield. I think he’d have an even easier time with Wilder, who would trip over his own feet and probably get stopped by volume. Fury I don’t know. It just really clicked for me how important a fighter’s mind is if you’re talking about things that transcend weight.”

Mulcahey switched sides in mid-debate. (This is one of the reasons why I don’t rush these Ratings Updates out – I’m especially talking to you @MIGHTYMaxBoxing, who tried to put us on blast via Boxing Twitter, and Joe Ibarra who DM’d me on Instagram.) The Ring Ratings Panel is an international committee of adults with career and family obligations which sometimes delays their participation, but even after everyone has weighed in with their two cents, I like to give them a “cooling off” period to allow for changes of opinion, which is something I encourage. I want the best input possible because I make everything public and transparent.)

“I said yesterday that Inoue is still my No. 1,” stated Mulcahey, “but I was really persuaded by Montero’s bringing up wins on the road (which Inoue has as well) for Usyk, which I do think are extra credit worthy. It’s enough to swing my vote to Usyk… Yeah, I think so. But again, it is such a close call I am not going to argue either way.”

Panelist Tris Dixon had the final word and the respected author/editor/scribe/podcaster kept it short and sweet: “Usyk P4P #1 for me.”

Pound-for-pound – Usyk regains the No. 1 spot.

Heavyweight – Usyk is now Ring Magazine champion. Anthony Joshua takes the No. 1 spot. Filip Hrgovic remains at No. 8. Zhilei Zhang enters at No. 10.

“Usyk was too smart for Joshua,” said Wainwright. “However, the British juggernaut came on and his pressure and bodyshots certainly had Usyk in trouble before the Ukrainian master stepped things up and closed out the fight. Like Tom said on Twitter, I was more impressed with AJ in this fight than the first fight. No doubt in my mind Usyk won.

“I was shocked at how AJ reacted in the ring, dumping The Ring belt on the ring apron, that was not cool. The Ring belt is like the U.S. flag; it never touches the floor! Someone should have jumped in and saved him from himself but he’s the big dog in that team and I guess nobody wanted to upset the boss. 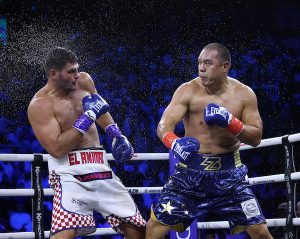 “Filip Hrgovic struggled mightily with the apparently underrated Zhilei Zhang. He got up off the canvas, but he didn’t seem to wake up until the later stages. I think it was fairly close but Zhang probably deserved it. I would move Hrgovic back to No. 9 and bring in Zhang at No. 10. That reflects the closeness of the fight.”

Added Montero: “Great stuff Anson, thank you for keeping up with everything during a busy weekend of action. I agree with you on all suggestions. What a gutty performance from Usyk; those championship rounds showed the world who he truly is. Sadly, Joshua’s post-fight behavior gave us a glimpse into who he truly is as well.

“I need to re-watch Hrgovic vs Zhang. Watching it live, I thought the Croatian out-worked his opponent to take a close fight. But most of Boxing Twitter seems to feel Zhang won.

Added Panelist Adam Abramowitz: “I wouldn’t drop Hrgovic for a fight that he could have won. I’d keep him where he is.”

Added Sugiura: “I agree with Hrgovic to stay where he was.”

Gray posed the question of dropping Joshua a notch (mainly for the record).

“Does Joshua drop one spot following loss? Trade places with Wilder? I can see the logic in him staying put because he turned in a great performance.”

Answered Wainwright: “I think we keep Joshua at No. 1. If Wilder looks impressive against Helenius, we could make the move then.”

Light heavyweight – Callum Smith remains at No. 4 after a fourth-round KO of No. 9-rated Mathieu Bauderlique, who drops out of the rankings. Craig Richards enters at No. 10.

Junior welterweight – Alberto Puello enters at No. 9 following a controversial decision over Batyr Akhmedov, who drops to No. 10.

Junior lightweight – Hector Garcia advances to No. 2 after outclassing top-rated Roger Gutierrez, who drops to No. 7.

“Garcia followed up on his excellent win over Chris Colbert earlier this year o unseat WBA titleholder Roger Gutierrez by 12-round unanimous decision,” stated Wainwright. “Brilliant night for the Dominican.”

Junior featherweight – Angelo Leo exits due to inactivity. Mike Plania enters at No. 10.

Bantamweight – John Riel Casimero exits the rankings due to inactivity. Rau’shee Warren exits the rankings following a six-round decision loss to journeyman Francisco Portillo. Keita Kurihara and Ryosuke Nishida enter at No. 9 and No. 10.

Email Fischer at [email protected]. Follow him on Twitter and IG at @dougiefischer, watch him and fellow Ring editors Tom Gray and Tris Dixon discuss all things boxing on Ring Ratings, Reflections and Rants; and join him, Tom Loeffler, Coach Schwartz and friends via Tom’s or Doug’s IG Live most Sundays.