Damian Sosa: I am a fighter on the rise, and I continue challenging myself

Mexican fighters tend to develop their careers on the side of the border in which they were born, and only a handful attempt the difficult task of becoming prophets in both their own lands and abroad.

Such is the case of rising junior middleweight Mexican contender Damian “Samurai” Sosa (20-1, 11 KOs), who is set to square off against Ronald “Diablo” Cruz (18-1-1, 12 KOs) in a 10-round main event on Friday, Aug. 26 at San Joaquin County Fairgrounds in Stockton, California.

“I was born in Mexico DF but I lived my life in Tijuana,” said Sosa in a recent phone interview. “I started out as a boxer there and I am ready to take off in my career, to look for those fights that could put a title fight closer to me. And here is where we are, I am at 20-1 and we’re going full speed to keep it like that way.”

Even though he will be facing Cruz in his third bout in the US, Sosa remains faithful to his adoptive town on the other side of the border, but that doesn’t mean he will stop there in his search for a brighter future.

“I live in Tijuana. But two fights ago I met Joe Vargas. He’s a trainer based in San Diego. He’s helping us with the technical stuff. I have my own trainer since I started. But when I was looking for sparring partners and other things I ran into Joe Vargas, and he is helping me grow as a fighter.”

His search for challenging sparring partners was more fruitful than he could have hoped when he got hired to work with one of the very best in the bizz.

“About two years ago, in 2019, I was sparring with Jaime Munguia, and Joe Vargas acted as a link with Canelo (Alvarez), to meet him. I had already helped him with sparring in one of his camps, and we started doing it again. We had the opportunity to be in his gym, and have him help me instead of the other way around, and I absorbed everything that the champion has to give,” said Sosa about his days with the fighter that was considered back then the best pound-for-pound boxer in the world. “Motivationally it is great for me, and it’s a dream come true. I never imagined being there with him, and it’s a huge motivation for me. I am like a kid in first grade, eager to learn it all and taking in everything that the champ can give me.”

All the schooling in the world, however, could not possibly keep Sosa from eventually getting a bad grade, and that moment came midway through his career when he dropped a decision to Artem Oganesyan in Canada back in 2019.

“I was not at the right level to fight that kind of opponent at that moment, but I believe that life sometimes puts a test in front of you, and I feel I learned a lot in that fight and had to think whether I wanted to box or not,” said Sosa about that fight, which happened in his 12th professional bout. “It was a good decision to take that fight because I learned a lot from that defeat, but I believe that it is something I always remember, to take boxing seriously and give it 100%. Once you lose you know right away what you did wrong, and you start processing everything again.”

With that in the past, Sosa moved on to a 9-0 unbeaten streak since then, and plans to take that number to double digits in his fight against fellow once-beaten Cruz, in a crossroads bout that will have serious consequences for the loser and better prospects ahead for the winner.

Sosa feels he’s been there and he has the chance to make the most out of this situation as well.

“Right now I don’t feel that pressure. I am focused on the fight. My mind is set on victory. I work really hard for all my fights. And this crossroads thing is not something I have in my mind. If it happens, I will have to accept it, but right now it’s not in my mind.”

Cruz’s better stoppage percentage seems to be a concern for Sosa, but only up to a point.

“I think he’s a big puncher, he’s a guy with 12 knockouts, and he’s a tough fighter. I feel that at my level and at the place I am at right now every fighter is tough. It is not something I am too worried about,” said Sosa, who claims he hardly ever studies his opponents too much.

“It may sound crazy but I don’t watch my opponent’s fights too much. I always leave that to my trainers, I train according to their instructions. One or two days before the fights I put the puzzle together and try to put it all in perspective watching the videos.”

With this being his second fight in a boxing hotbed like Stockton, Sosa expects the few fans he made in the first one to turn up and make him feel the love this time around too.

“This is the second fight I will have there. I had my US debut in December there. It is great to have a following already, and have a lot of people screaming “Samurai, Samurai!” It is great. Having my second fight in Stockton is gratifying and it makes me really happy to think that there will be a lot of people waiting there for me, anxious to see me fight. Once again I have to give my best and get them hooked on me again.

“If I win here, I will be in a position to jump not just one more step ahead, but two in a single leap. I am really focused. I think I can have another fight before the year is over, and for next year I would be taking fights at this level again. I am a fighter on the rise, and I continue challenging myself. The company brings fighters who are tougher and tougher with every fight, just as it should be. And I will be ready to take on those guys so that in one or two years, God willing, I would be ready for a title shot of some kind.”

How ‘bout making it easier by trying to cash in an old favor from one of his paesanos by asking Alvarez to place him in one of his undercards?

Sosa claims he prefers to earn his money the hard way.

“I have a good thing going with Canelo, and we’re doing great without asking for anything,” said the 25-year-old. “I just let God and fate do their part and let me get to where I deserve to be without asking anything of anyone, and I believe that if it ever happens it will be because they offer it to me. I am not even good to talk to sponsors! It would have to happen only if God puts it in my path.”

The fight will headline a full card of action that will be streamed live in English on FightHype and in Spanish via TV Boxeo. 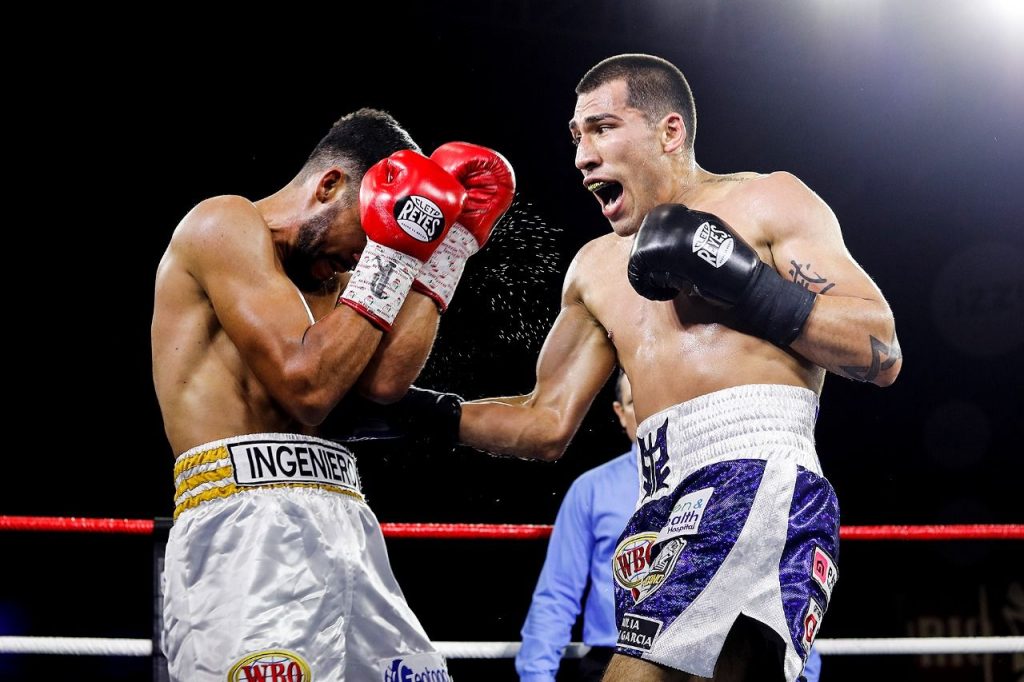 Diego M. Morilla writes for The Ring since 2013. He also wrote for HBO.com, ESPN.com and many other magazines, websites, newspapers and other outlets since 1993. He is a full member of the Boxing Writers Association of America and an elector for the International Boxing Hall of Fame. He has won two first-place awards in the BWAA’s annual writing contest, and he is the moderator of The Ring’s Women’s Ratings Panel. He served as copy editor for the second era of The Ring en Español (2018-2020) and is currently a writer and editor for RingTV.com. Follow him on Twitter @MorillaBoxing

Jeremiah Milton: I’m Getting Better and It’s Showing in My Performances

Sergio Mora Backs Canelo To Win, But Doesn’t Rule Out Upset By Golovkin

Sergio Mora Backs Canelo To Win, But Doesn't Rule Out Upset By Golovkin