Mayer, who is rated No. 4 on the mythical pound-for-pound list, was a standout amateur who notably claimed bronze at the 2012 World Championships and represented her country at the 2016 Olympics.

She beat Ewa Brodnicka (UD 10) to become WBO 130-pound titleholder and later added The Ring and IBF titles by besting Maïva Hamadouche (UD 10). The 32-year-old has retained her titles against Jennifer Han (UD 10).

Baumgardner, who is rated No. 2 by The Ring at junior lightweight, won two national titles before turning professional in 2017. After winning her first six fights, the Ohio native lost to future junior welterweight titleholder Christina Linardatou (SD 8).

“The Bomb” won four fights and showed her vaunted power when annexing the WBC title from Terri Harper (TKO 4). The 28-year-old followed that by beating Edith Soledad Matthysse (UD 10).

Can Mayer (17-0, 5 knockouts) use her boxing skills to good effect and keep Baumgardner on the outside? Or will Baumgardner (12-1, 7 KOs) force Mayer to stand and trade? Will it be Mayer’s smart boxing brain that prevails or Baumgardner’s raw power? This is the biggest fight of both lady’s careers. Who will deal with the pressure and rise to the occasion better?

Here’s how the experts see it:

“I think Baumgardner is a skilled and powerful pro. I know a lot of insiders that picked her to beat Teri Harper and she cleaned house that night. However, I still think she’s a work in progress and Mayer’s experience at this level could be crucial. I think Baumgardner has a lot of success early, but Mayer closes the gap to win a close – maybe even controversial – decision.”

“This is the toughest test of Mayer’s career to date. However, I think Mayer rise to the occasion and will pick her spots and box a disciplined fight. Baumgardner is too good not to have moments and the fight will be exciting but I like Mayer to win majority decision.”

“Mayer is taller, rangier and an excellent ring general, plus she has fought the better level of opposition. She showed against Maiva Hamadouche that she can successfully trade with a respected puncher, if need be, but I don’t expect her to do so here. I believe she will use her boxing skills to pile up the points, frustrate Baumgardner, and score the unanimous decision victory.”

“The Mayer-Baumgardner unification bout is a true “pick em” match up. Mayer is more experienced and has faced better opposition, but she can’t crack an egg with her punches. Meanwhile, Baumgardner has recently shown a level of explosiveness and athleticism that is rare among female fighters. Nonetheless, I believe skills will decide this bout, and Mayer has the edge there. It will go the distance, and Mayer wins by close unanimous decision.”

“Alycia Baumgardner is agile and athletic. She’s also got some power. All of that figures to test Mayer, especially in the early rounds. But Mayer’s ring sense and educated footwork will begin to score midway through the fight and prove to be overwhelming in the end.”

“Mayer has turned into one of my favorite fighters over the last several years because she keeps getting better and she actually wants to fight the best competition out there. I give Baumgardner credit for not trying to let this fight marinate, but I believe Mayer’s superior boxing and the coaching of Al Mitchell will be the Kryptonite for her. We’ve never seen Mayer in with a puncher like Baumgardner, so there’s always that, but if she avoids anything foolish, she should cruise to a points victory.”

“In a historic month for women’s boxing, Shields and Serrano will be making her case to move on up in the pound-for-pound discussion from their respective positions at 2 and 3. Mayer, on the other hand, will have to leave it all in the ring if she wants to hold on to her No. 4 in that list. She will probably achieve that goal and even earn an extra measure of respect for taking on the woman who destroyed tough-as-nails Terri Harper to grab a portion of the title. But a walk in the park it will not be. Mayer is just as determined and talented as Shields. But unlike her old Olympic teammate, Mayer will be facing a ferocious rival who is completely unafraid and genuinely unimpressed by Mayer’s accomplishments. There will be zero room for mistakes for Mayer, but my guess is that she knows what she’s up against, and she will be giving it all in search for a career-defining win.” 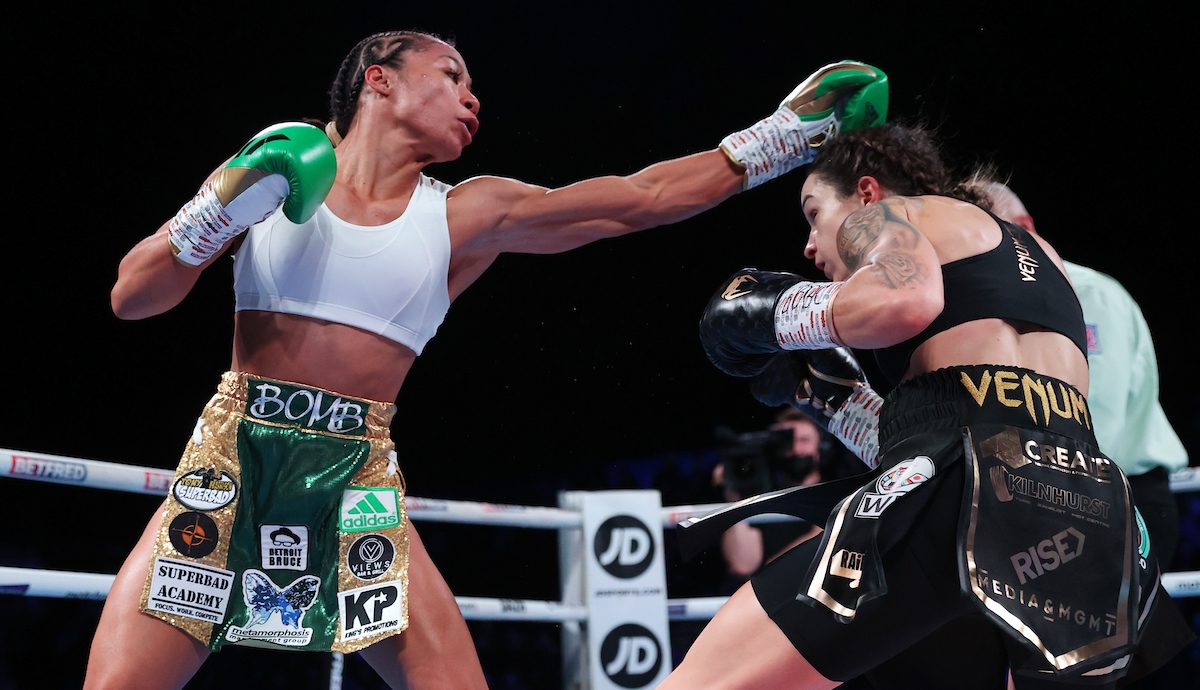 “Mayer win this one with the edge in experience via TKO round 8.”

“Baumgardner is strong comes forward will look for the KO. For Mayer, she will change it up. Give different looks box and attack has a lot of heart. Mayer by close unanimous decision.”

“I think Mayer-Baumgardner will be a competitive fight. I can see Mayer having moments but like Baumgardner by hard fought decision. I don’t see a KO with only two minutes rounds to work, so I’m going with the more active, conditioned and faster fighter.”

“An ultra-competitive women’s fight. It’s obvious that Baumgardner has a good punch but I think people underestimate her ability as a boxer. Despite the fact that I believe Mayer will win it will be a tough fight.”

“This one I will call a draw since I think this is a pretty even fight. I would lean towards Mayer but first time fighting outside the states can affect your mentally. Bottom line is it’s about time we have two great female fights on one card.”

“I believe this pairing could be the fight of the night. Alycia Baumgardner is improving but I don’t believe she’s competent enough in her back foot boxing skills to beat Mayer who is an excellent attacking fighter and a deceptively good body puncher. It will be close but Mayer wins it for me.”

“A great fight, very, very tough fight. I would lean toward Mayer on points, could even be a split decision.”

“Difficult fight to predict, it will be very interesting I think Mayer by unanimous decision.”

“Baumgardner looked a bit special with her spectacular knockout of Terry Harper and while that still remains, there were hints last time that’s she’s still a work in progress. Moments of discomfort when generally outclassing her opponent raised a small doubt for me and we know Mayer will certainly ask deeper questions. Don’t expect the ridiculously aggressive FOY contender vs. Hamadouche from Mayer, she can box much smarter than that but an intelligent press might be the thing. Baumgardner looks like she has ‘the stuff’ to compete but Mayer has different ways to win as well as experience which gives her the edge against a potentially exciting opponent.”

“Great match-up. There’s quality on both sides here. I pick Mayer by decision. But Baumgardner is in this fight. She has an ‘it’ factor for sure and she can punch. She also has extra incentive to punch Mayer, considering some of the pre-fight comments. I think Baumgardner sees insecurity in Mayer and is motivated by what she sees as an entitled boxer demeaning her accomplishments. If Mayer can navigate herself out of potential trouble, I see her winning on points simply by her normal volume of blows. She throws more and lands more than Baumgardner.”

“This will be a fight where, I believe, lots of punches will be thrown. I think Baumgardner will be forced to fight, even though she usually likes room to punch using her long jabs and good movement and, if she can do this, she can win. If Mayer is able to force the pace of the fight, I think she will outwork Baumgardner and score a close points win on the cards.”