Jake Paul scored a final-round knockdown that helped him secure an eight-round decision over MMA legend Anderson Silva on Saturday at the Gila River Arena in Glendale, California. Paul (6-0, 5 KOs) won the cruiserweight bout by scores of 77-74 and 78-73 (twice).

However, the content creator-turned-prize fighter had his heavy hands full with the 47-year-old veteran, who stalked and appeared to outwork the much-younger odds favorite throughout much of the Showtime PPV main event.

Since his pro boxing debut in January 2020, which he won with an opening-round TKO of fellow YouTuber Ali Eson Gib, Paul has utilized a very successful formula: stay away from boxers. The 25-year-old influencer advanced to fighting former NBA players and retired/aging MMA fighters as he amassed a small fortune and a 5-0 pro boxing record that includes back-to-back victories over former UFC welterweight champ Tyron Woodley.

However, despite his age, Silva brought something to the table that Paul’s previous opponents lacked: boxing experience. The former long-reigning UFC middleweight champ has dabbled in boxing since 1998, when he lost his pro debut via first-round stoppage in his native Brazil. Silva (3-2, 2 KOs) fought again in 2005 (winning by stoppage) but really dedicated himself to boxing in 2021 when he scored an eight-round decision over former WBC middleweight titleholder Julio Cesar Chavez Jr. and blitzed fellow MMA legend Tito Ortiz in one round.

That experience showed as Silva remained patient in the opening round, despite getting tagged with two straight rights from Paul. Silva gradually stepped up his punch output over the next three rounds, adding a little showboating and careful pressure to his game. The 6-foot-2 southpaw was able to walk the back-peddling Paul into the ropes and corners where he landed uppercuts.

Paul, however, remained game. And while he allowed the older man to back him up, he lobbed the harder punches, most of which were slipped or blocked, but enough landed to have blood flowing from Silva’s nose from Round 4 on. But Silva remained undeterred and by the end of Round 6, Paul looked like he was out of gas and ideas. 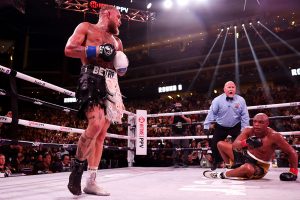 Paul scored the only knockdown of the competitive fight. Photo by Christian Petersen/Getty Images

However, when it looked like Silva would pull the upset, Paul let a few powerful body-head combinations go in a close Round 7 and then landed the big right hand that produced a knockdown in the opening minute of Round 8.

“It’s a surreal moment,” Paul said after the bout. “Hard work pays off. First and foremost, I want to say thank you to Anderson. He was my idol growing up. He inspired me to be great. He was the first celebrity I ever met. Without him, we wouldn’t have had a fight this year. He’s a tough mofo. A legend. I have nothing but respect for him.”

Silva was gracious in defeat and did not dispute the official verdict.

“I think the judges got it right,” Silva said. “Listen, it’s tough to come inside here and fight a young kid. I tried to do my best. I trained hard every day. Jake is better than me today. I don’t have anything bad to say about my opponent. I think everybody needs to respect this kid because he’s doing the best job.”

Next for Paul? He’s wisely set his sights on more MMA legends, calling out 37-year-old Nate Diaz during his post-fight interview.

On the undercard, Alejandro Santiago, The Ring’s No. 8-rated bantamweight, stopped Antonio Nieves (20-4-2, 11 KOs) after seven rounds. Santiago’s pressure got the better of the stick-and-mover by the middle rounds of their scheduled 10-rouner, prompting Nieves’ trainer to keep his fighter on the stool before the start of Round 8.