At its best, the boxing ring is the one place in the universe where pride and vanity can be crushed in a split second under the rage of an underdog determined to give it all in his quest to see his name live on forever.

That’s exactly what happened on June 1, 1935 in Valencia, Spain. And the memory of that fateful night, a fight in a “ring within a ring,” still resonates today. All it needed was a proper acknowledgement to the winner, one final moment of recognition of a victory that made history for Spain and for the family of the fighter who lifted (if only metaphorically speaking) the country’s first-ever boxing belt.

The actual lifting of the actual belt, however, would have to wait a few years.

On that day, the fighter in question got his due in the form of a shiny, brand new Ring belt, delivered in the very same place in which he epically defied all odds to beat the incumbent champion at the time and from which he was hoisted aloft by his countrymen before being paraded around town in a delirious frenzy of a celebration that ended in the wee small hours of the morning with the champion, one Baltasar Sangchili, being delivered to his own doorstep a mile or two away from the ring in which he made history that night, with his boots, trunks and swollen countenance still soaked in blood, sweat and glory.

The belt’s road to Valencia, however, was a bumpy one. And a “placeholder” with a fantastic story of its own took its place for all those years, becoming one of the city’s most prized sports memorabilia items in the process.

The Ring belt awarded to Baltasar Sangchili (right) sits next to the one created by public subscription by the fighter’s supporters at the Plaza de Toros de Valencia, where Sangchili earned the title in 1935 – Photo by David Calvo

On the 100th anniversary of the Federació de Boxeig Comunitat Valenciana, both belts were on display during the ceremony in which the history of boxing in that region (the third largest in Spain) was honored. One by one, several former amateur and professional fighters made their way to the stage to receive their due tribute, before the most successful of all of them received the long-overdue homage that the local federation had planned so carefully.

In a short speech, The Ring magazine (represented by this writer) paid tribute to the figure of Sangchili, born Baltasar Belenguer Hervás in 1911, changing his name by adopting a Chinese friend’s full name (Chang-Chi-Li) as his nom de guerre to hide the facts that he was still under the legal age to become a prizefighter – and that his father would not have approved it anyway.

As a 17-year-old apprentice of the manly art of defense, Sangchili did his best to learn on the job – and failed, for the most part, during a disappointing early run of 2-2-2- in his first two years.

That would change very soon. In 1930 he racked up an unbelievable 17-1 mark for the year followed by an 11-0 mark in 1931. He continued his career with fights all over Europe with mixed results but developing a reputation as a tough fighter and a fan favorite in his hometown.

His big break came in 1935, when he was finally able to lure the world champ into his own lair. In a fight to be held at the Plaza de Toros de Valencia, the local bullring, Sangchili would be taking on none other than Ring bantamweight champion of the world “Panama” Al Brown, the first boxing champion born in Latin America.

How good was Brown?

“Bobby Diamond, Brown’s manager, had to bring the belt with him, but he didn’t bring it,” said Manuel Valero, current editor of EspaBox, the country’s foremost boxing publication. “They never thought they could lose the belt.” 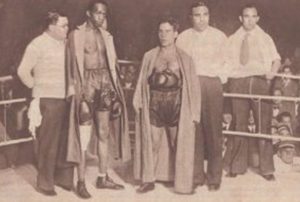 In fact, Sangchili was such a prohibitive underdog that when the fight was delayed due to rain, most of the fans and writers crossed the street to the Estació del Nord train station and bailed for Madrid, where a more competitive bout between Marcel Thil and local hero Ignacio Ara was expected to take place.

Those who did that missed one of the most iconic fights in Spain’s history.

Spurred on by the voices of 20.000 fans accustomed to see blood and death in that same scenario week after week, Sangchili charged against the much taller Brown much in the same manner in which he had defeated Brown in a non-title bout three months earlier. Putting on lackluster performances in non-title affairs was not entirely uncommon in that era, and the unfazed and unimpressed Brown figured that a rematch with the belt at stake would be a completely different proposition.

And it was. Sangchili ended up winning 13-2 in the final tally to earn the title of bantamweight champion of the world and to unleash a celebration in which he was all but kidnapped by his fellow countrymen, who, much in the manner of a triumphant matador being carried on his men’s shoulders through the puerta grande after a huge victory, paraded him around the ring first, around the bullring later, and around town until they finally reached Sangchili’s home and dropped him there to rest in what would surely be his finest night.

In the morning, the realization that a few things were left behind in the bullring’s locker assaulted Sangchili.

He probably recovered his clothes and other personal belongings quite easily.

His new championship belt, alas, was nowhere in sight.

And so it would remain for a few more months. 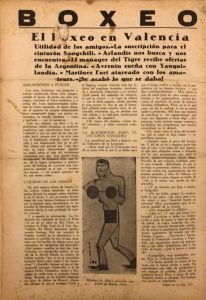 When the IBU (International Boxing Union, one of the era’s “sanctioning bodies” of sorts) failed to produce the belt, and when the same happened with The Ring’s belt in an era of flawed and delayed international communications (which would be made significantly worse by the start of the Spanish Civil War in 1936), Sangchili’s countrymen decided that the man deserved to receive the physical representation of his phenomenal achievement by any means necessary, and set out to produce one from scratch.

Every boxing federation in Spain was asked to contribute to a fund to produce a championship belt for Sangchili, but the already rarified political climate ended up boycotting the project.

The result was nothing short of a work of art.

A belt fashioned out of gold threads much in the manner of a matador’s fajín (a sort of cummerbund) was created, bearing all the icons and images that symbolized Sangchili’s championship as well as his national pride. The yellow and red badge of Valencia was there, as well as the bat (an animal considered a lucky charm by the locals), a rooster (in Spanish, “bantamweight” is usually referred to as “peso gallo” or – excuse us – “cock weight”), a pair of boxing gloves, a branch of olives and an orb.

A lovely, temporary replacement for what would surely be the official belt, to arrive anytime soon after such numerous requests from the local federation and the fighter himself, right?

The wait, indeed, turned out to be much longer than that.

The war, a bloody and bitter affair that pitted families and friends against each other for years, got in the way in more than one way.

Baltasar’s brother Manuel would die in that war a few months after the fight, leaving behind a son bearing his same name, barely 20 days old at the time of his father’s demise. In time, Manuel Belenguer would become the proud owner of Sangchili’s belt, and, as his sole heir, the man in charge of keeping his uncle’s memory alive during all these years.

On October 15, 2022, it was Manuel, now in his late eighties, the one who got to hold the belt that Baltasar had won almost 90 years earlier, and in the same place in which he won it.

Manuel’s tears under the blistering sun at noon marked the emotional realization of Baltasar’s dream of receiving his championship belt one day. But they surely will not be the last tears shed on the arena of Valencia’s bullring in its 170 years of existence. 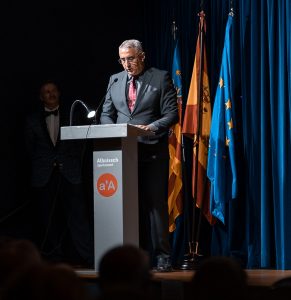 RingTV.com writer/editor Diego Morilla speaks during the centennial ceremony of the boxing federation of the Valencia region in Spain

There will be plenty of tears shed for both the bulls and the bullfighters as they shed their own blood on the sands of the old plaza, even as bullfighting marches on to its demise just as it has already in other parts of Spain where it has already been banned. There may be tears of either joy or pain shed by other major prizefighters after a night of boxing in the same venue.

And then, one day, there will come the time when the sons and grandsons of those lucky countrymen of Baltasar’s who were present on that night in 1935 will see a plaque or maybe even a statue being erected in his memory, as Spain’s first and most unlikely champion and the pride of his soon-to-be-torn-apart beloved country.

“It is a shame that there isn’t even a mention on this walls about Sangchili’s fight,” said Manuel, vowing to continue campaigning for that final act of justice to happen.

That day will come, and not a moment too soon. And then, one final tear will be shed in Sangchili’s memory as he is enshrined in his own hometown as the hero that he has been to his people (with or without a belt) for the past 87 years.

Sweet D Files: When it comes to retirement, there are more Brooks Hatlens than Floyd Mayweathers in boxing

Sweet D Files: When it comes to retirement, there are more Brooks Hatlens than Floyd Mayweathers in boxing