CARSON, California – Regis Prograis-Jose Zepeda was an elite-level matchup on paper and that’s how it played out on a chilly Saturday night in the open-air arena of the Dignity Health Sports Park.

Prograis (28-1, 24 KOs), Ring Magazine’s No. 1-rated junior welterweight, relentlessly wore down the game and always dangerous Zepeda to an 11th-round stoppage in front a pro-Zepeda crowd and countless boxing luminaries. The New Orleans native picked up the vacant WBC 140-pound title with his hard-fought victory, which was presented by Legendz Entertainment in association with MarvNatin Promotions and was broadcast live on FITE.tv (PPV).

“This was my hardest fight, I’m not going to lie,” Prograis said during his post-fight interview. “I want to congratulate Jose Zepeda, that dude is tough, tough, so tough.”

Zepeda (35-3, 27 KOs), Ring’s No. 3-rated contender, has a lot in common with Prograis. Both are 33. Both are southpaws. Both are hard-nosed boxer-punchers. Both are throw-back fighters willing to face the world’s best fighters in their opponent’s backyards. Both are willing to earn their ways back to the top after suffering setbacks.

Prograis scored three stoppages vs. mid-level opposition since suffering his only loss, a majority decision to Josh Taylor in 2019, coming into the Zepeda bout. Zepeda had won six in a row, including the 2020 Fight of the Year vs. Ivan Baranchyk, since dropping a majority decision to then-titleholder Jose Ramirez in 2019.

Zepeda said he would consider retirement if he didn’t beat Prograis during fight-week interviews.

“This  is my third title opportunity,” the La Puente, California resident told The Ring on Tuesday.

“I have all the experience. I’ve had two title shots, I’ve been in the fight of the year. This is the best preparation I’ve had in my career, so Prograis is going to face the best version of me. It’s now or never. This is it for me. This has to be it.”

It wasn’t, but Prograis thinks it would be a mistake for Zepeda to call it quits.

“I have so much respect for you,” Prograis told Zepeda. “You prepared me to win this belt and to hold this belt. Don’t stop (boxing). You gonna be a world champion.” 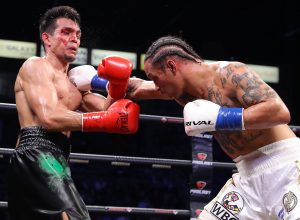 Prograis takes it to Zepeda. Photo by Tom Hogan

However, on November 26, the night belonged to Prograis, who wanted it more and would not be denied. Prograis was the aggressor throughout a fight that began as a high-speed chess match and gradually transformed into a battle of attrition by the middle rounds. Prograis forced that transition.

In the early rounds, Zepeda welcomed the higher-volume attack, confident that his composed counter-punching technique would catch Prograis coming in the same way he repeatedly clipped Baranchyk. However, Prograis is smarter and more versatile than the Russian puncher that went to war with Zepeda and was ultimately sent to hell.

Prograis seemed to have fun as his body warmed up in the cold night air. He kept moving, his hands, his head and upper body, his feet; in and out, feinting, taunting, but usually THROWING with bad intentions. He wanted to fight. Zepeda wanted to catch him coming in, but both junior welterweights proved to have world-class chins.

So, as Prograis gradually dragged Zepeda into a more physical fight, he wisely attacked the body, a tactic that paid dividends down the stretch. By the late rounds, Prograis’ assualt had swagger. He assailed Zepda with flamboyant overhand lefts mixed in with hammer-jabs. 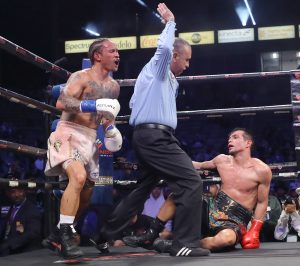 Prograis had taken the fight out of Zepeda by Round 11. Photo by Tom Hogan

Zepeda had moments in every round but just wasn’t able to hurt or discourage Prograis, and he couldn’t match Prograis’ punch output or physical strength when they grappled for most of Round 10. Zepeda got his last rise out of the crowd by landing his best shots during that hard round, but he was gassed going into the championship rounds and Prograis pounced on him early in Round 11, stunning him with a big left and quickly overwhelming him into the ropes where referee Ray Corona waved it off at 59 seconds of the round.

“At first I wanted to come out and box him,” Prograis said, “but then I started catching my rhythm. I trained hard for this, like six months, I worked my ass off every single day, so I wanted to take him deep and drown him.”

Mission accomplished. Prograis, now a two-time world titleholder, refused to call anyone out during his post-fight interview.

“I don’t have to say nobody’s name. I’m going to let them say my name.”

Members of the media brought up Taylor during the post-fight press conference.

Prograis said he would like to run it back against the one man to defeat him.

Email Fischer at [email protected]. Follow him on Twitter and IG at @dougiefischer, and join him, Tom Loeffler, Coach Schwartz and friends via Tom’s or Doug’s IG Live most Sundays.

BN Verdict: For John Ryder, the emotions of an anticlimax are becoming familiar ones

BN Verdict: For John Ryder, the emotions of an anticlimax are becoming familiar ones