Hall of Fame announces Class of 2023; Tim Bradley, Carl Froch and Rafael Marquez to be inducted

Tim Bradley battles Hall of Famer Juan Manuel Marquez in 2013. Bradley will be inducted into the IBHOF’s Class of 2023, along with Marquez’s brother, Rafael.

“This is one of the greatest days of my life. I appreciate this so much,” said Bradley, the former junior welterweight and welterweight titlist who upset future Hall of Famer Manny Pacquiao in June 2012 by split decision. “Thank you from the bottom of my heart. I’m ecstatic and don’t really know what to say. This is everything I wanted and everything I worked for. I’m full of emotions and there are so many things going through my mind from my past that got me to this point. This is a dream come true. This is my heaven, the International Boxing Hall of Fame.”

Bradley fought Pacquiao three times, and after suffering his second defeat to “Pac-Man,” he retired with a professional record of 33-2-1 (13 KOs). He now works as a ringside commentator on ESPN’s broadcasts.

Froch, “The Cobra,” finished his career at 33-2 (24 KOs), including key wins over Jean Pascal (W 12) for the vacant WBC super middleweight title in 2008, followed by successful title defenses against Jermain Taylor (TKO 12) and Andre Dirrell (W 12) in the first round of the Super Six World Boxing Classic super middleweight tournament. Froch dropped the belt to Mikkel Kessler (L 12) but rebounded to recapture the vacant WBC title from Arthur Abraham (W 12).

After beating Glen Johnson to advance to the Super Six final, he lost a 12-round decision to Andre Ward. In his next bout, he won the IBF 168-pound strap with a fifth-round TKO over Lucian Bute in 2012 and the WBA belt with a 12-round win over Kessler in 2013. Froch defended both titles in back-to-back wins over George Groves (TKO 9, TKO 8) before retiring in 2014.

“Brilliant! This is amazing, great news!” Froch said. “It’s amazing to be inducted into the Hall of Fame alongside so many legends of the sport. Boxing is the best sport in the world. It tests everything in a man and a woman. The mentality, discipline, grit, determination, heart, desire, everything is all in that ring and it is just you on your own with your opponent. For me to be inducted with the greatest of all time from every weight division is just fantastic! I’m grateful to be recognized.” 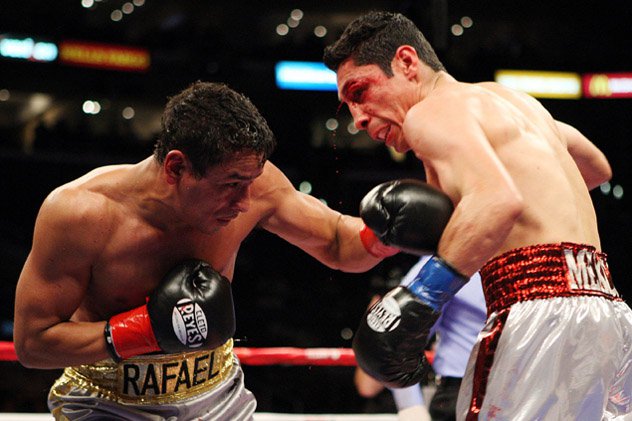 Two-division titlist Rafael Marquez will join his brother, four-division titlist Juan Manuel Marquez (2020) in the hall, as will Joe Goossen join his older brother, promoter Dan Goossen (2020). They are just the fifth set of brothers honored in Canastota, joining Mike (1992) and Tommy (1993) Gibbons, Angelo (1992) and Chris (1994) Dundee and Vitali (2018) and Wladimir (2021) Klitschko.

In 2003, Rafael Marquez stopped Tim Austin (TKO 8) for the IBF 118-pound belt and successfully defended it seven times, including a pair of wins over Mauricio Pastrana (W 12, TKO 8) and Silence Mabuza (TKO 4, TKO 9).

He became a two-division titlist with a seventh-round stoppage over Israel Vazquez for the Ring, WBC and lineal junior featherweight titles in the first meeting of their four-fight series. Vazquez defeated Marquez in the second (TKO 6) and third (W 12) bouts of their series with each fight earning “Fight of the Year” honors (2007 and 2008 respectively). The rivalry concluded at 2-2 after Marquez scored an empathic third-round knockout in their fourth bout in 2010. Marquez unsuccessfully challenged Toshiaki Nishioka for the WBC junior featherweight belt (L 12) and ultimately retired in 2013 with a professional record of 41-9 (37 KOs).

“Perfect! Thank you very much,” Rafael said. “I don’t have the words to describe how I feel receiving this great news. I am very happy. It is a great honor to be in the Hall of Fame and I am very proud to be in Canastota with the greatest boxers of all time.”

Bradley, Froch and Rafael Marquez made it under the modern category; Tiger Jack Fox and Pone Kingpetch under the old-timers; Alicia Ashley and Laura Serrano under modern women; Joann Hagen as a women’s trailblazer; Brad Goodman, Joe Goossen, and Brad Jacobs in the non-participant department; and Seth Abraham and Tim Ryan as observers.

“I’ve got to tell you, I’m absolutely stunned,” Joe Goossen said. “To think I’ll be in the Hall of Fame with my brother Dan is probably the best thing I’ve heard since he died. When I got into the sport back in 1970, I would have never thought in 10 million years that I would really make a mark and eventually end up in the International Boxing Hall of Fame. I’m shocked and honored.”

Joseph Santoliquito is an award-winning sportswriter who has been working for Ring Magazine/RingTV.com since October 1997 and is the president of the Boxing Writers Association of America.

Bradley, Froch, Marquez Announced For Hall of Fame Class of 2023